An editorial about my Japanese book “The Magic of Illusion – How to Make Women Look Gorgeous”  in “Da Vinci”, a magazine specialising in books and manga comics.

The writer, Minami Asato, starts off by wondering when it was that she started to feel scared of looking at herself in the mirror. Big tummy, big bum, short thick legs. With age, she can detect more defects about her body and finds it difficult to come across clothes that really fit her well. She wants to find clothes that cover the areas she doesn’t like but she struggles to get it right. Read more 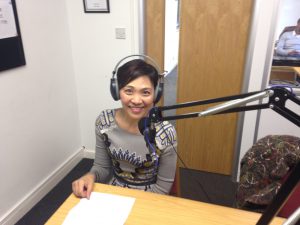 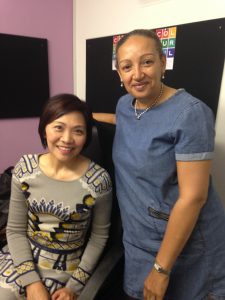 Toshiko was invited to Colourful Radio for a live interview on Advice Surgery with presenter, Sonia Poleon. She talked about how she got started as an image consultant and all about the image consultancy and other services she provides. What a lovely and friendly team of people they were!
Click here to listen to her Podcast radio interview on Toshiko's Tips page (30min 4sec). 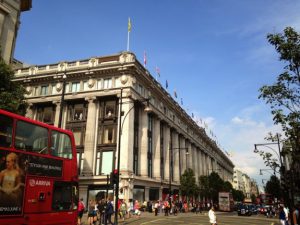 英国ライフ倶楽部 British Life Club 7 July 2014
Toshiko wrote a Japanese column about Selfridges, one of the prestigious department stores in the UK. She often takes her clients to their personal shopping suite, which makes the shopping experience more comfortable, efficient and enjoyable.

This store was founded in 1905 by an American Harry Gordon Selfridge. He was a pioneer in changing the style of shopping in England, when in the early 20th century, no one was allowed to freely touch the products or women would not go shopping on her own. He moved the perfumery and cosmetic counter to the front entrance and his famous phrase "xx days to Christmas!" is to this day still used all over the world.

TV series, "Mr. Selfridge" where Harry himself is played by Jeremy Piven, has proven to be a massive hit and filming of series 3 is said to begin soon. 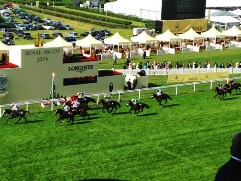 英国ライフ倶楽部 British Life Club 22 June 2014
Toshiko wrote a Japanese column about her day at the Royal Ascot. She talks about the Royal Procession, racing, fashion, dress codes, manners and the history of this British royal racing that has played an important role as one of the national annual events for more than 300 years.

Why not join us at the Royal Ascot and spend a splendid day in the Royal Enclosure? 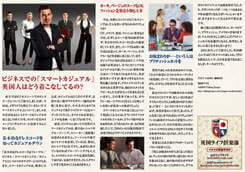 Toshiko, as an image consultant living in London, was interviewed for a column edited by British Life Club. In the previous issue , she talked about different dress codes in business. This time, she spoke about 'smart casual', a dress code that is now widely accepted as a type of business wear. If you are not aware of how to coordinate your look, it can make or break your whole image. She also gave a few pointers on how to get it right. Toshiko's Japanese blog about this colum can be read here. 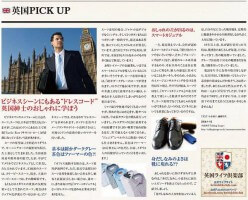 Toshiko, as an image consultant working extensively in London and abroad, was interviewed in a column edited by British Life Club. She talks about dress codes for businessmen. Smart casual wear has now become accepted as one of the dress codes at work in Britian too, but the fundamental rules still do exist. Toshiko's Japanese blog about this column can be read here.

HUB PRESS April Edition free paper issued by HUB / 82ALE HOUSE, British-style pubs in Japan Toshiko wrote a column about “pub rounds”, the British custom and manners in a pub, which is still alien in Japan. You can read her Japanese column here in her blog.

いいね！英国ライフ Love British Lifestyle
25 March 2014 Edited by Nobuyo Fujioka
Toshiko wrote a column about the colour that you are expected to wear to funerals. They can slightly vary depending on the country and religion. If you are planning to attend a funeral in Japan, don't think twice. It's absolutely, definitely, positively black.

You can also listen to the interview with the Podcast recording below. 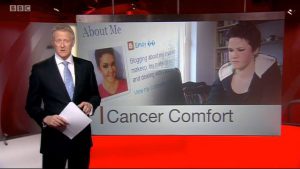 Twenty-one year old Emily Parker was diagnosed with cancer last year. Having to go through five months of chemotherapy, she struggled with side effects such as hair loss. To cope with her treatment, she started to write a blog about what she was going through and about make-up too, something she is very passionate about. Writing a blog helped her to find comfort but it has also touched the hearts of so many people that there are now more than 7,000 followers.

Toshiko was interviewed by BBC on her thoughts about what image means to those who are going through similar illness like Emily. The news clip was aired on BBC South East Today and BBC Sussex.

Emily is very creative and dreams of becoming a professional make-up artist. Seeing how lively and charming she looks, it is unbelievable to think that she has gone through such illness. On the other hand, Toshiko was pushed with time before the interview and had no time to even reapply lipstick. Learning from Emily, Toshiko swore to herself that she ensures she touches up from next time! We wish Emily all the best for a bright future. Here is Emily’s blog: Emily Eva Alice 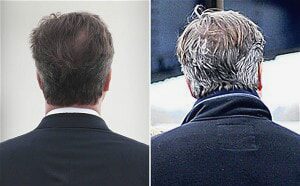 article: Snap of David Cameron shows a grey man is back at No 10 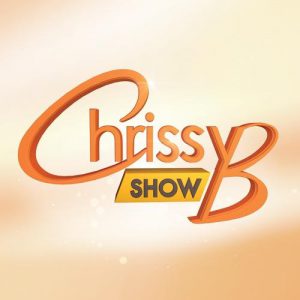 Chrissy B ShowChrissy B Show
4 March 2013, 'How to Sell Yourself' aired on Sky 203.
Click here to watch the five-minute video of Toshiko conducting an image consultation.

IGNITES EUROPE A Financial Times Service- 17 April 2012 by Madison Marriage, People Feature, "How the wrong shoes can finish you"

IGNITES EUROE A Financial Times Service - interviews Read Toshiko's Tips on the importance of appearance in job interviews in financial services, and the different aspects of image men and women need to focus on.

UROPE A Financial Times Service- 13 September 2011 by Heather Dale, People Feature- handshake Toshiko commented on the importance of making a good impression when meeting clients and people in the financial services industry and especially "How a handshake can make a difference". 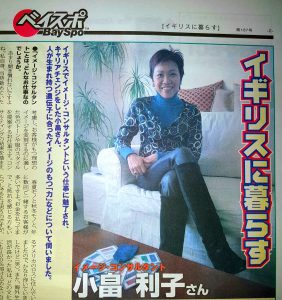 5 February 2009, page 2-3, article and photo: Mayuko Ono (freelance journalist)
Toshiko was interviewed in a Japanese weekly newspaper published in the UK. The article covers how she came to become an image consultant and what image consulting is all about. Click on the image for the article in Japanese.

Negocio (Diario libre de informacion economica)
6 February 2009, page 32, article: Teresa Ruiz
On a Spanish economic publication, Toshiko gave advice on where to shop if you're looking to dress like a real British gentleman. With the current exchange rate, she also pointed out how advantageous it is for Spanish shoppers to come to the UK.
Click here, where you can read the article in English translated by Pilar Sebastian, one of our Talking Image consultants. 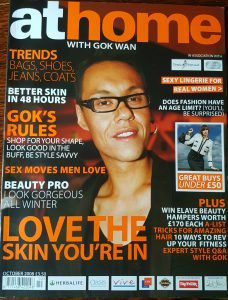 Toshiko and Talking Image consultants, Zoe Robinson and Belinda Ch'ng Bruh were interviewed about the benefits of colour analysis and what image consultants can do for you!

City Times of Khaleej Times, Dubai UAE
26 May 2007 , page 5
"Time out in the heart of London"
Toshiko is introduced as a personal shopper and image consultant, working with Durley House Hotel in the No. 1 English language daily newspaper published from Dubai, United Arab Emirates.

IT's the new trend sweeping the City. Some of the UK's top firms are hiring 100-an-hour image consultants to make sure their staff look and sound the part. From CEO to receptionist, staff learn how to dress smartly, inject gravitas into their voices, and improve their body language.

"If someone wants to run an international company and he wears a Mickey Mouse tie or watch, it gives the wrong message," said Toshiko Kobatake of London consultancy Talking Image, whose clients include KPMG, Price WaterhouseCoopers and IBM.

"That's hen-tertainment!"
Our Revive Team spiced up a memorable hen party held at the luxurious Durley House Hotel in Sloane Street. The girls were pampered with Mhairi's make up, Kelly's hair styling, Kiyoko's massage and Toshiko's colour analysis. Click the image for the article.

"FHM's 100 greatest websites" (words: Tom Cullen)
Some of the fabulous websites that Toshiko selected are included in the list!

FOR HER
Toshiko Kobatake, 'personal image consultant', celeb stylist and founder of www.talkingimage.co.uk

GALLERY 28
The best boutique in cyberspace
"A hidden treasure box full of intricate style and beauty. Perfect for women of sizes 8 to 14 and guaranteed to melt the heart of the love of your life." www.gallery28.com

AS SEEN ON SCREEN
Steal a celeb's style
"If she's spotted a celeb wearing something, these people know what it is and can get hold of it. If it's Sienna Miller's bracelet or Nicole Richie's bikini, it'll be here." www.asos.com

BODYMETRICS
For the denim obsessive
"Here they will tailor-make the finest fitting jeans from scratch by making hundreds of online calculations in seconds. Your girl can even design the jeans." www.bodymetrics.com 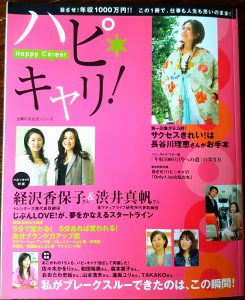 July 2006, pages 13-15 Shufu no Tomo
Toshiko was featured in one of Japan's leading women's magazine, explaining how image consulting can help you to enhance your look and to establish your own personal brand successfully. The article also covers the eye-opening consultation the editor experienced with Toshiko.

Click on the image for the article in Japanese. 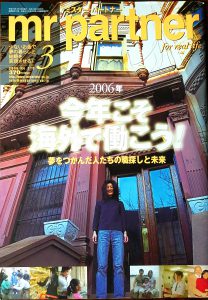 March 2006, page 13 Mr. Partner
Toshiko was featured in this Japanese magazine about running her image consultancy business in the UK. Find out more details on the Image Consultation page.

This session is ideal if you have a reasonably small amount of clothes and would like to do both wardrobe planning and image consultation at your home. (Colour swatches, make up and written profiles are not included.)

This package is dedicated to the pair of you; whether you are a mother and daughter, a wife and husband, partners, siblings or just great friends. You can take the consultation together or individually, it's purely up to you. It's always so fun and relaxing to share an experience with someone you care about. The great news is that you can also take advantage of the special price offered for this package, just for the two of you.

This session does not include make up.

Even if you have had an image consultation or wardrobe planning before, it is important that you review and update your image on a regular basis. To ensure that you maintain your current image, revamp it further or perhaps project a different look due to change of lifestyle or ideas, we will be at hand to achieve the look that you want.

This plan is perfect for busy people like you who want to always look your best, but in reality, find that spending time for yourself comes last on your do list. This "All-Year-Round" plan ensures that you look and feel great, not just today or tomorrow, but any day, anytime, all year round in the most efficient and effective way.

The benefit of 365 Plan is that it takes you through an image consultation, wardrobe planning and seasonal personal shopping within a one-year period, allowing you flexibility to suit your schedule and is offered at a more attractive price. If you don't look after yourself, who will? We will guide you all the way.